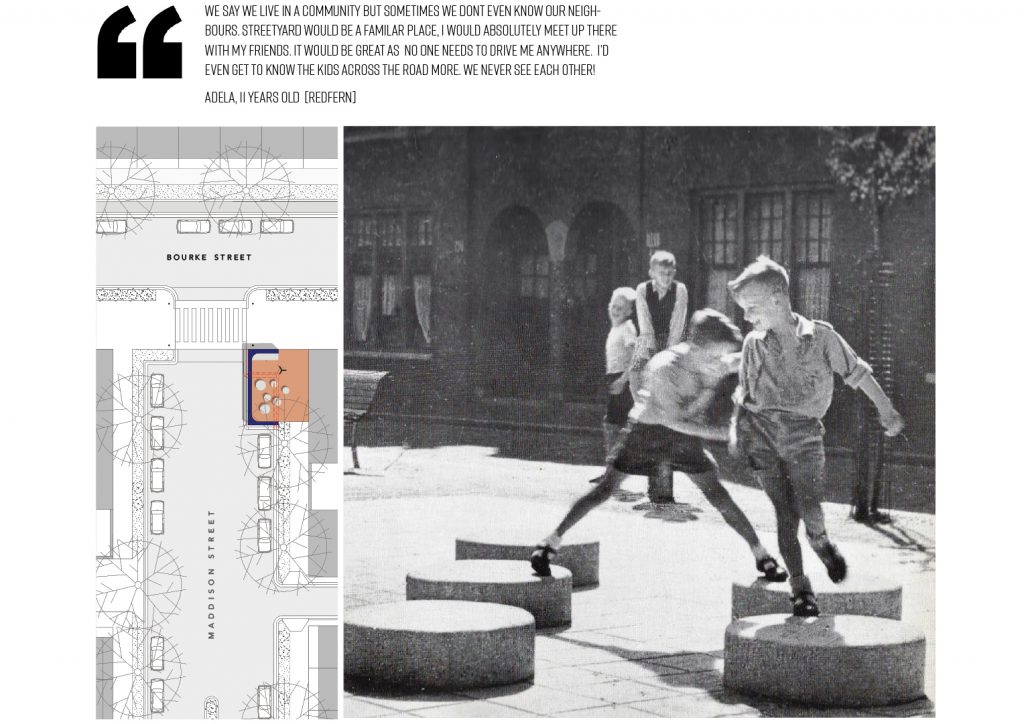 STREETYARD is a super simple concept. It is a backyard, or frontyard for a street.

STREETYARD is a shared space for people in THEIR street. It is a place to play, meet, or just be – for young, old, and in between. It is a backyard in the public realm and a place for neighbours to come together. It is accessible, safe and a stone’s throw from home. Kids can play unsupervised (heaven forbid!). The burden of transport and its emissions are eliminated. STREETYARD is on your doorstep.

STREETYARD springs from the 700+ playgrounds designed by Aldo van Eyck in Amsterdam after WWII. These ‘micro-playgrounds’ were interspersed across the city on footpaths and on vacant land, occupying and transforming the neglected and residual spaces in a post-war city. Like these playgrounds, STREETYARD – as a kit-of-parts – could be overlayed across Sydney in every suburb. It doesn’t have to be big, it can be a strip or a pocket, on a street corner in the inner-city or in the center of a cul-de-sac in a 70’s suburb. STREETYARD would serve to connect neighbours who have never met and kids who have never played together before. STREETYARD is a reimagining of space and a reemergence of growing up outside.

The idea of the ‘third place’ is not new, it is however an elusive entity in our modern world. The pandemic has highlighted how important it is to invest more in the local to bolster community and improve wellbeing. STREETYARD would be the low-maintenance hub of community interaction & play in every street in Sydney.