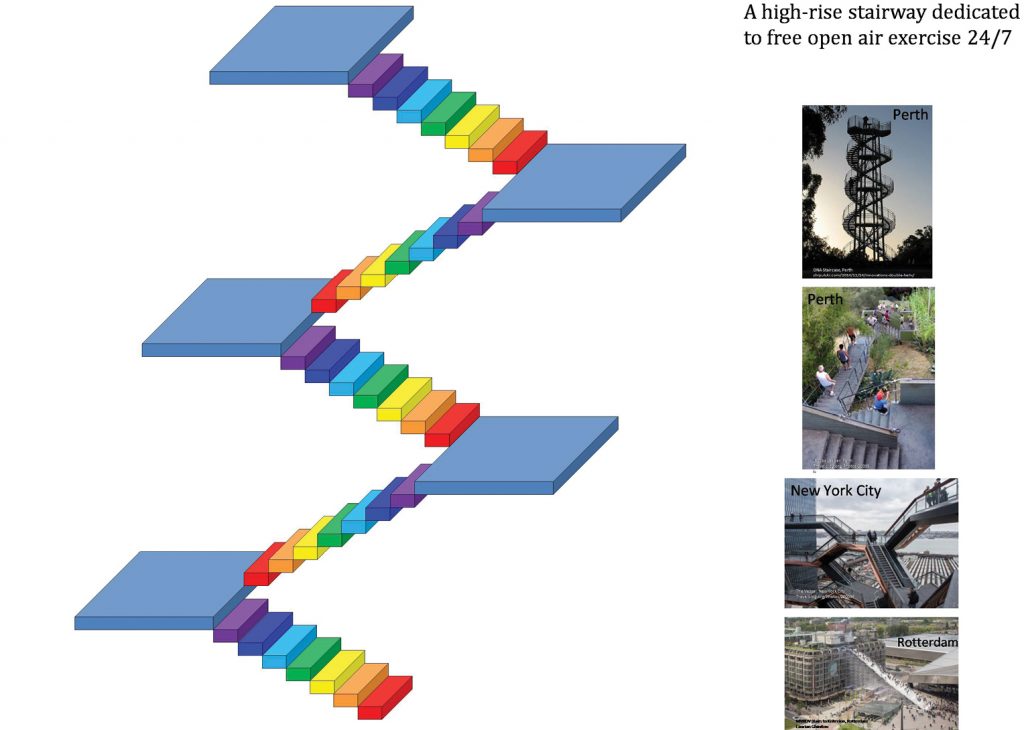 My idea is a giant open-air stairway, not to access a building but dedicated to free exercise 24/7. It will be stimulating, memorable and give a sense of achievement.

Children’s playgrounds are popular as they allow free and open-air physical activity, teamwork, games and creative exercise. Adults have the same needs but few suitable facilities.
Many stairways around the world were intended just for access but became popular as exercise destinations in their own right. A good example is “Jacobs Ladder” in Perth (http://lifeonperth.com/jacobsladder). The Sydney Windmill Steps are frequently used by exercise groups and devotees have documented such “workout stairs” (https://sydneysolesisters.org/sydney-urban-workouts-stairs-part1/ http://outfithealth.com.au/sydney-stair-running-workout/ )

Climbing significant stairways makes reaching the top a goal. The Eiffel Tower, Empire State and Sydney Tower (https://www.stairchallengeaustralia.com.au/ ) all have significant stairways and host popular ascending competitions. The Vessel in NYC is a high rise sculptural icon formed of interconnecting staircases that put the area on the world map.

Integrating the staircase on the side of a new building would reduce costs, double as a fire escape and allow iconic architectural design.

This proposal will create a better life for Sydneysiders by facilitating exercise and involvement in the open-air, be free and part of the 24 hour city.

The staircase will deliver a great public space by being iconic, functional and showcase strenuous exercise for young and old while only requiring minimal CBD land footprint.

This idea is transformational by providing an active CBD landmark space with health benefits and zero operating costs.