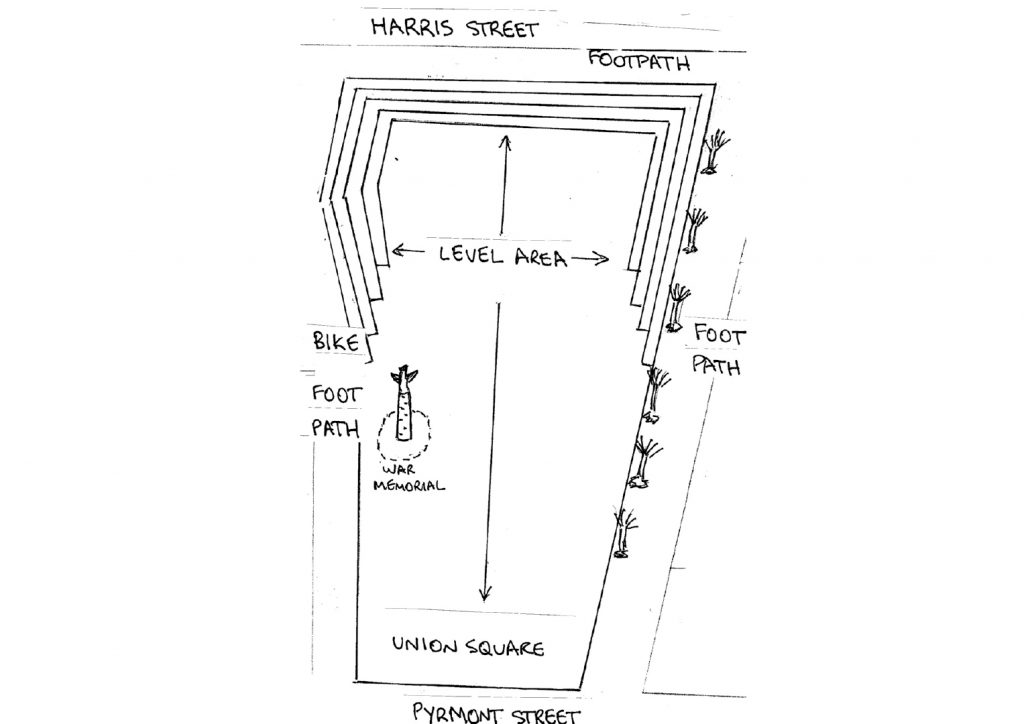 Union Square, Pyrmont contains the Anzac War Memorial, with its landmark ‘Angel’ statue, and is bordered by beautiful stone buildings and trees on its northern side. Anzac Day ceremonies have been held there for years, as have other community events.

Problems with the Square currently are:
• Steps at angles in unpredictable places constitute a definite hazard. Walkers often encounter a step they hadn’t noticed and weren’t expecting. Edges of the steps are difficult to see at night and in shadow.
• The Square is cluttered. There is a limited number of seats and they are apparently randomly placed.
• There is no overall apparent concept underlying the layout of the square; it is mostly a pedestrian thoroughfare rather than a square.

Union Square: a plan
Essential features of the concept (see sketch) are:
• The site slopes downwards from Harris Street to Pyrmont Street and narrows as it does so. This topography renders it particularly suitable for reconfiguration with steps at the high end suitable for people as spectators or audience to sit in tiered rows, or just to sit down and chat.
• The War Memorial would be moved a short distance to the Pyrmont Street end of the Square. It was previously relocated when Pyrmont Bridge was closed to vehicular traffic.
• In the flat space between the War Memorial and the steps, events and performances could be staged.
• The trees would remain to provide shade.

A Village Square, reconfigured as suggested, would be of great value to the community.