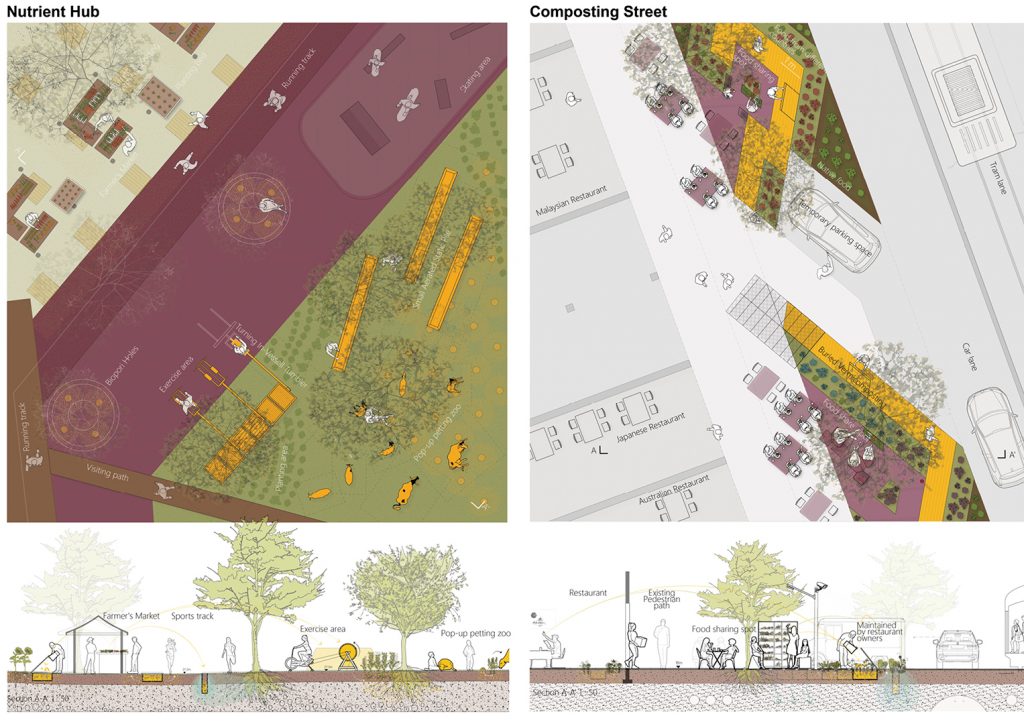 Unlocking the potential of public spaces with food waste

Sydney is facing a food waste crisis and will face the loss of food independence by 2050 because the natural nutrient cycles are disrupted by landfills, artificial fertilizers and soil degradation. I propose a system that utilizes the urban soil in potential public spaces as the biggest food waste reprocessing infrastructure, produces compost for organic farms, rehabilitates the urban soil and increases adaptation to climate change.

The Nutrient Hub is a multifunctional public open space that tests many of the urban composting techniques, fosters innovation and education, and brings people together. People would unconsciously promote the food recycling process while enjoying programs such as pop-up petting zoos, and playground equipment which doubles as composting tumblers. There would be a Farmers Market where The community can buy healthy food and farmers can take compost back to their organic farms.

The Composting Streets will be the main place for on-site food waste decomposition. Only one lane will be allowed for cars, the rest will be given over to composting, tree planting and street activities. Buried vermicomposting containers would create a free-range worm farm underground, capitalizing on the increased soil fertility to provide more canopy cover. fresh food donation spots will placed outside of restaurants, allowing people to share food, work outside and socialize in those spaces. The compost end product will be taken to the nearby farms and community gardens.

The decomposition process becomes visible and educational to all. Sydney will be able to create inclusive and productive public spaces.