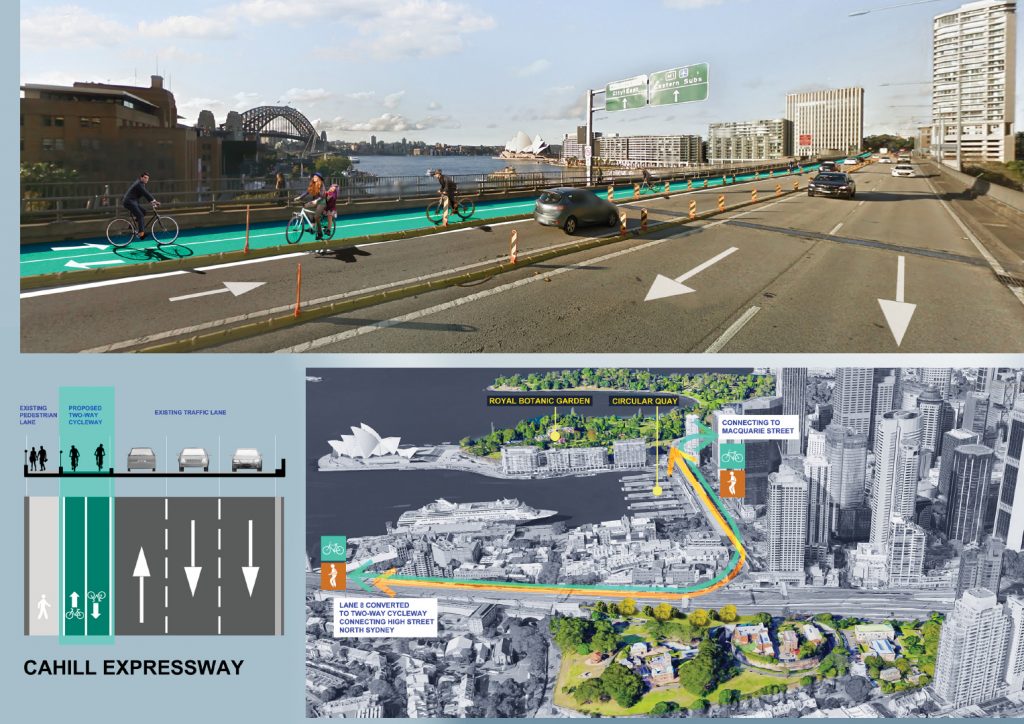 Sydney from a new perspective

The Cahill Expressway, now devoted to giving cars a spectacular journey across Circular Quay, could be transformed into a world-class public space, giving pedestrians and cyclists the spectacular journey as they safely traverse the city from east to west and north to south.

Inspired by Car-Free days in Mexico City and Cardiff, Wales, which encourage people to retake the streets by turning usually congested roads into hives of activity, it allows people to experience their cities from a whole new perspective.

By closing down Lane 8 of the Sydney Harbour Bridge and 1 lane of the Cahill Expressway for a weekend, it will allow pedestrians and cyclists a new scenic route through their city. Imagine starting in North Sydney, riding up onto Lane 8 of the Harbour Bridge, the former tram route, across the Cahill Expressway enjoying views of the Bridge and Opera House, around to Macquarie Street past the Conservatorium of Music, and then across the Domain to finish at the Art Gallery of NSW, now opened with an expansive new gallery extension.

This one-weekend experiment has the possibility of stimulating a hive of activities currently unthinkable in an area of the city largely undesirable to people.

It is stage one in a 4-stage vision that leads to the transformation of the Cahill Expressway into a dynamic pedestrian and cycleway, joining together the best of Sydney’s public spaces and giving a new dimension to the harbour city.