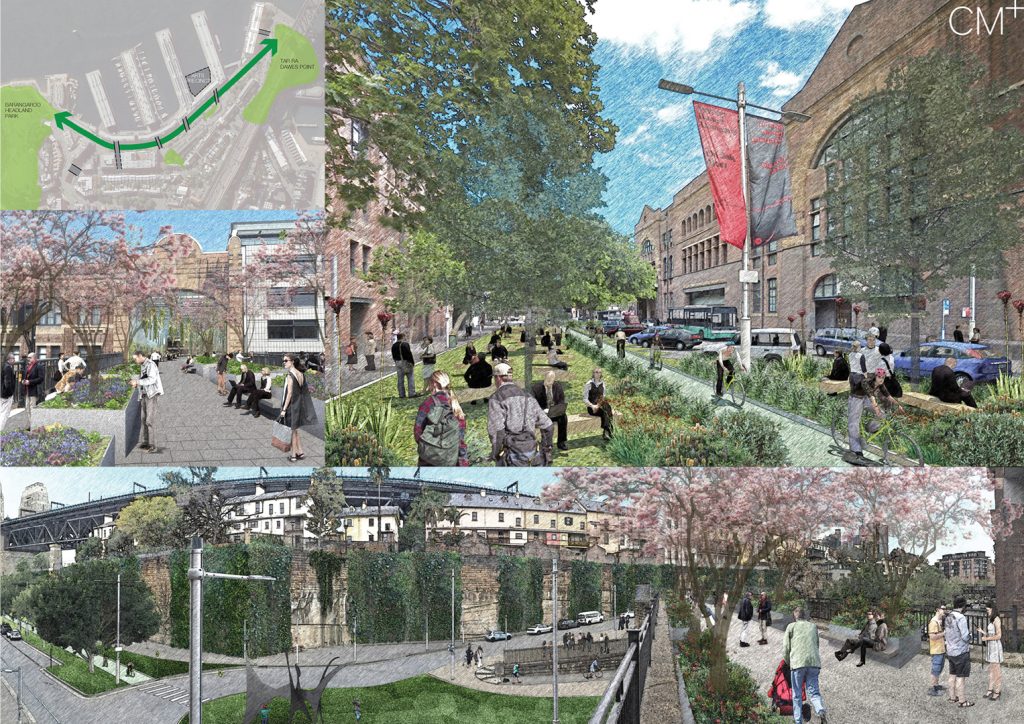 Hickson Road is reimagined as a sweep of green space connecting Dawes Point to Barangaroo.

The contained space of Hickson Road will be transformed into three-dimensional green space between the wharfs and waterfront buildings to the north and the sandstone cutting and elevated topography to the south. The industrial artefacts of this space, its bridges, rock cuttings and robust architecture will provide a framework for a series of lush gardens along the ground, over bridges and up walls that will reveal themselves as one moves through the precinct.

The green experience will be provided by a themed series of garden bridges linked to form a complete experience along Hickson Road. It will be a productive landscape featuring herb gardens and fruit trees. Each bridge will be identified with a particular type of plant flowering across the seasons. Lighting and harvest events will be scheduled with the public invited to participate. The experience will unfold as people move between the water’s edge and the higher levels of Millers Point streets connecting these two precincts as it connects the two headlands.

This new green space will provide a green link between the two headlands, as part of a greater harbourfront walkway system, will be a series of threads weaving between the Hickson Road Greenway, the wharf edges, Pottinger Street, Windmill Street, Lower Fort Street and across the bridges connecting these paths. This path will complement the hardscape waterfront edge along the wharfs and allow a continuous green experience to link the headlands.