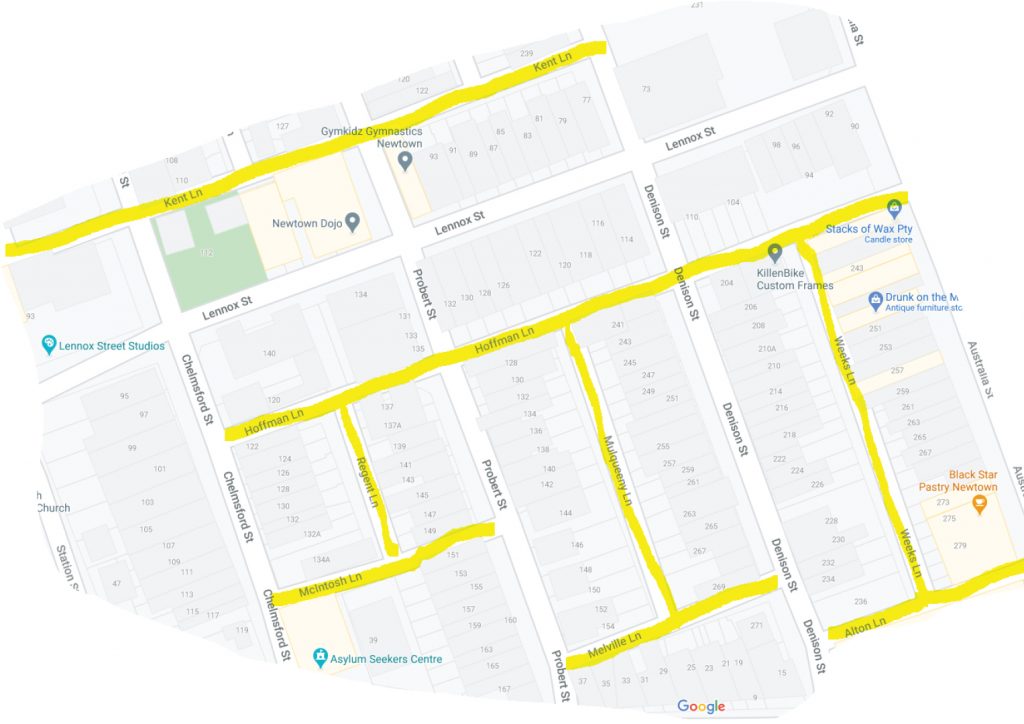 Greening of the Inner-City Laneways of Newtown
Donna Robinson

Making the laneways of the suburb of Newtown green

Recreation of inner-city laneways as pedestrian areas and greenspaces. The suburb of Newtown in the Inner West of Sydney has many laneways, which are frequently used by pedestrians but are bitumen streets. It would be wonderful if these laneways could become open spaces for community users to encourage interaction and provide nature corridors for bird and wildlife. A mixture of trees and shrubs instead of bitumen would greatly improve the quality of life of the neighbourhood and passers-by. It would allow children to play safely outside, for adults to exercise and relax and for neighbours to get to know each other better. Shared community gardens could also be included.

This is a very urban area with low green space relative to the population, one of the lowest in the city. The intersecting lanes between Denison and Oxford Streets Newtown from Bedford St to Salisbury Rd would be ideal as they are used by many pedestrians and the number of roadways is excessive relative to the number of houses and local population and the number of cars. This would create a more positive life and sense of wellbeing for people and improve air quality and encourage birds and wildlife. It would transform this area to achieve a more verdant lifestyle for the residents and visitors to the area. The reinvention of these laneways is an opportunity to achieve this, in under-utilised spaces. They would become a pattern of intersecting green parks throughout the area.