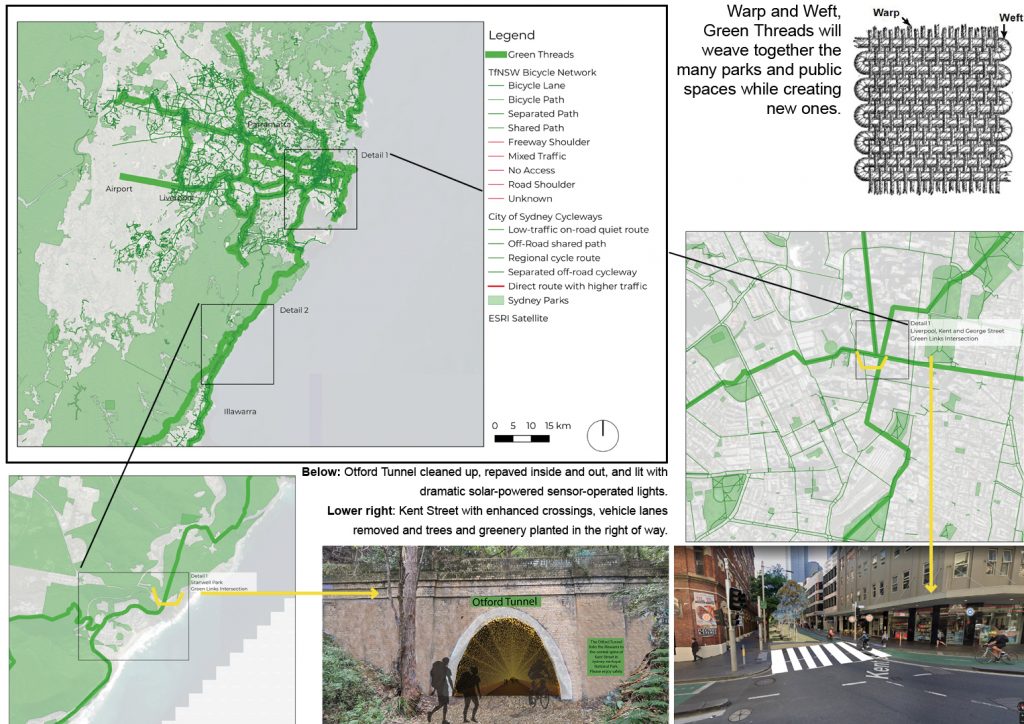 Linking Sydney’s small and large parks together with safe and green threads.

Great cities have great people. Great people are enabled to be healthy, productive, positive and connected by the armature of infrastructure.

This proposal demonstrates at a high and detailed level how the broader ‘Sandstone Mega-region’ may begin to be connected with a woven tapestry of major warp (threads) to the weft of the existing parks.

Methodology: The City of Sydney Bicycle Routes and the Transport for New South Wales (TfNSW) Bicycle Network shape files were downloaded. These gave the already agreed upon routes to use as a background. Detailed examination of many of the current routes would find they are not yet suitable for All Ages and Abilities (AAA) accessible active transport either are segments or as a network.

The Green Threads create not only a unified network across the region by name, but as a consistent series of intersections and upgraded road segments with road space reallocated to the pedestrian, cyclist and to green infrastructure of trees and water absorbing soils.

The Green Threads will be a recognisable extension of park space, offering a similar condition of shade, greenery, ecological function and safety from the motor vehicle. These will link not just places of work, but also link together the many small to large parks across Sydney and extend – though important ‘intersections’ such as the Otford Tunnel – to the Illawarra and to Newcastle.

This is an opportunity to link the overall parks system with carefully considered Green Threads to augment the liveability, sociability and ecological awareness of an already very great city. The people will be connected together, through public space.