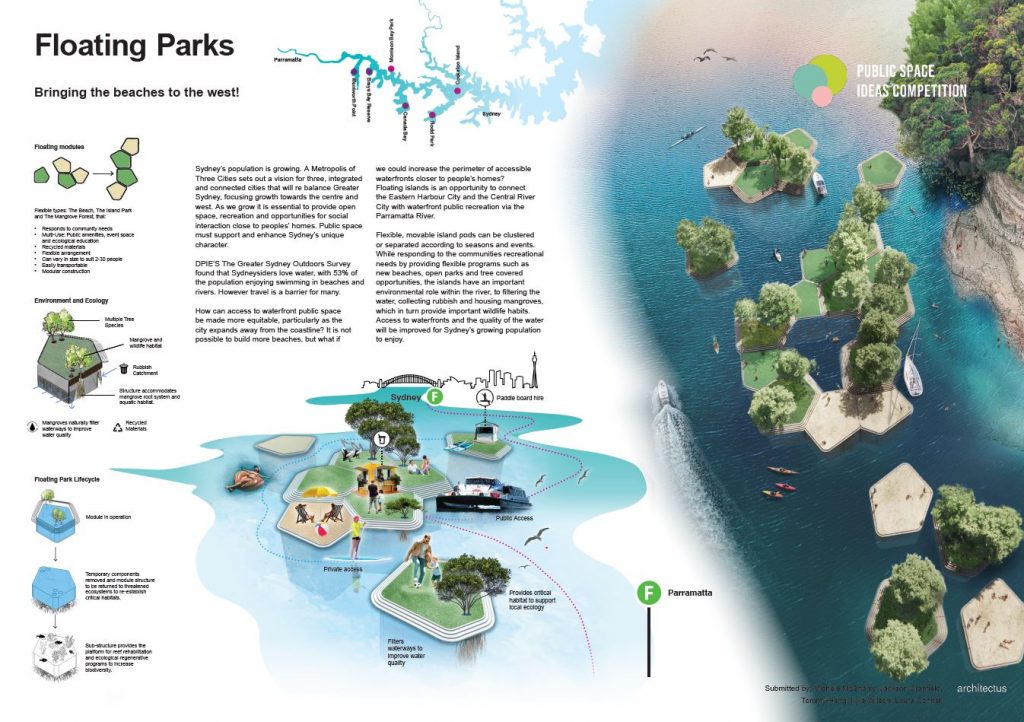 Bringing Beaches to the west

Sydney’s population is growing. A Metropolis of Three Cities sets out a vision for three, integrated and connected cities that will rebalance Greater Sydney, focusing growth towards the centre and west. As we grow it is essential to provide open space, recreation and opportunities for social interaction close to peoples’ homes. Public space must support and enhance Sydney’s unique character.

DPIE’S The Greater Sydney Outdoors Survey found that Sydneysiders love water, with 53% of the population enjoying swimming in beaches and rivers. However, travel is a barrier for many.

How can access to waterfront public space be made more equitable, particularly as the city expands away from the coastline? It is not possible to build more beaches, but what if we could increase the perimeter of accessible waterfronts closer to people’s homes?
Floating islands are an opportunity to connect the Eastern Harbour City and the Central River City with waterfront public recreation via the Parramatta River.

Flexible, movable island pods can be clustered or separated according to seasons and events. While responding to the communities recreational needs by providing flexible programs such as new beaches, open parks and tree-covered opportunities, the islands have an important environmental role within the river, to filtering the water, collecting rubbish and housing mangroves, which in turn provide important wildlife habits. Access to waterfronts and the quality of the water will be improved for Sydney’s growing population to enjoy.