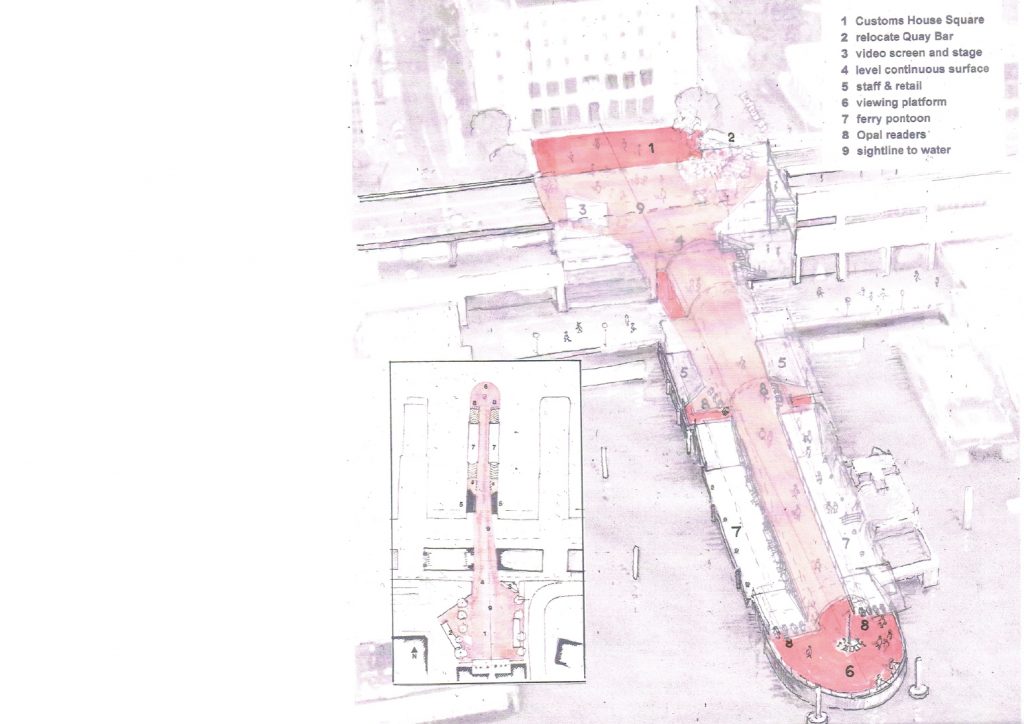 Circular Quay has perhaps undergone more transformations than any part of Australia since Europeans first set foot there. The station and wharves are about to undergo another major refurbishment.

Community concern and design input over the past 40 years has been directed at the perceived ‘barrier’ of the Cahill Expressway and railway. While previous proposals have canvassed demolitions and realignments, my premise (in line with recent government proposals) is that the basic structure of station and road will remain in place, as will the location and number of wharves.

South of this ’barrier’, Alfred Street divides into four public spaces, AMP’s Scout Place, Customs House Square, the light rail terminus and Herald Square. Of these Customs House is by far the more significant civic space and focus for Circular Quay yet it currently has a tenuous link with the harbour.

The proposal is to create a broad public promenade from the square to the water like a public pier, extending the public realm to the heart of Sydney Cove. This is achieved by reconfiguring wharf 4 as a central fixed public promenade flanked on each side with pontoons with access ramps north and south separating on and off passengers, removing kerbs and steps to provide a continuous level surface and ensuring that the refurbishment of the station and wharves maximise sightlines from square to water.

Meanwhile, the square is nudged into Loftus Street to provide a slightly bigger venue for public gatherings focussing on a stage and large video screen.