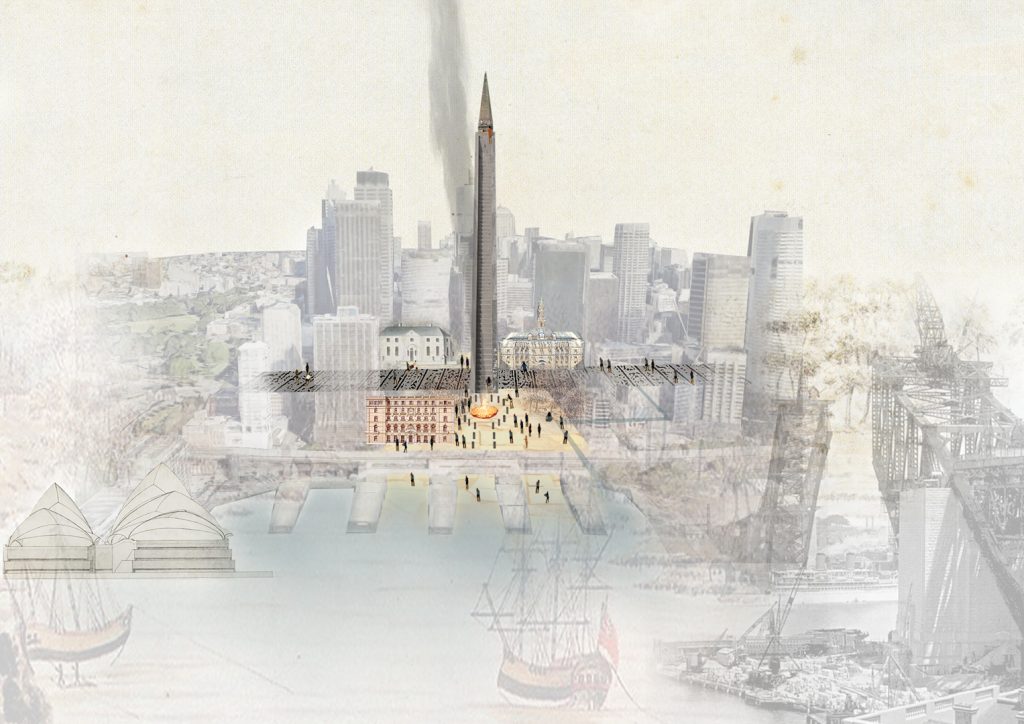 Reconciling the settlement of Australia at Macquarie Place

The Macquarie Obelisk marks the spot of the British flag from the First Fleet that signifies the beginning of British settlement of Australia. While controversial, the obelisk itself lies quietly amidst rapid development since. The idea here is to demarcate this space for a national apology. As Avenue of Reconciliation, Loftus Street and Bridge Street, the earliest streets of Sydney are pedestrianised from the hustle and bustle of cars and given civic importance. Paved Loftus Street aligns the axis from Sydney Cove towards the obelisk and the circle of fire, and Bridge Street re-laid with timber planks connecting the archaeological Government House. The existing obelisk is reinstalled on a plinth with steps leading up; taller than any skyscrapers of the city, now the Obelisk of Apology, not to glorify the historical act, but for one to climb up to apologize, and to be made aware all nation’s towering progress is due to this regretful historical moment. The Fire of Remembrance ritualizes the act of burning smoke before the obelisk, and to respect the land. The Tank Stream is to be made visible again, carved as water canal on the ground towards the cove, to reestablish the relationship of the stream with the city. This reclamation of historical space, the Avenue of Reconciliation, Fire of Remembrance and Obelisk of Apology demands not just acknowledgement of the civic importance of this place, but to begin a new chapter of collective memory, of reconciliation, apology and perhaps forgiveness. Lest we forget.