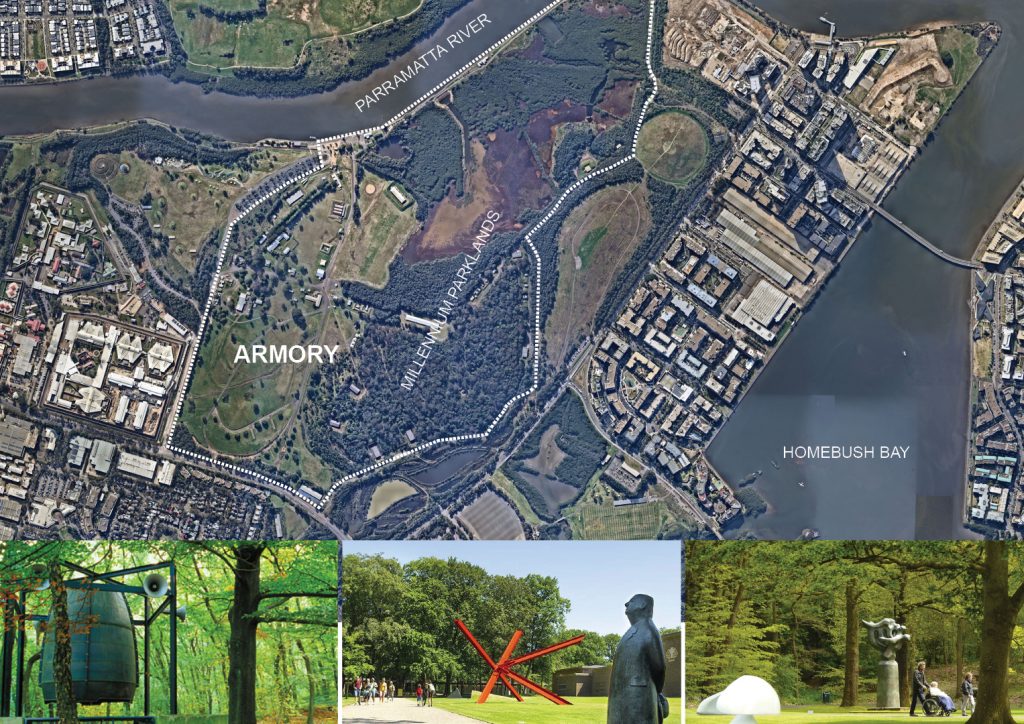 CO-OPTICO-OPTING NATURE, HERITAGE AND THE (FORMER) BELLICOSE FOR THE ARTS

The Newington Armory and Millennium Parklands are assets for the growing adjacent residential community and Sydney as a whole. At the geographic centre of the city this former Navy site has been sparingly used since the Olympics. There is a nascent artist’s community within the Armory that use the workshops and bunkers. One of the bunkers has been converted and serves as the Newington Armory Art Gallery but is underused. Cinematheque-Cinewest operates on site (3 times a year). Businesses ranging from accommodation to Segway hires/tours to a cafe successfully operate there. The vast grounds are a boon for walkers, cyclist and frisbee (disc golf) enthusiasts.
This proposal seeks to capitalise on all that by beginning to convert the grounds, including parts of the Millennium Parklands (if at all possible given the sensitive ecology) into a canvas for large sculptures and conceptual art. The Armory Sculpture Park can become the southern hemisphere’s equivalent of the great Kröller-Müller Museum Sculpture Park (Netherlands) in which modern art is juxtaposed with the natural setting within a National Park. Some images from Kröller-Müller are inserted beneath the aerial view of the Armory.
This idea would be an investment both in the patrimony of the city and in the multivalence of the space. With a potential rivercraft terminal at the entrance, good access to other forms of public transport as well as car access, not to mention walking and cycling tracks, the Armory Sculpture Park would be a go to facility for recreation and inspiration.