Policy
What does the change of government mean for Sydney? 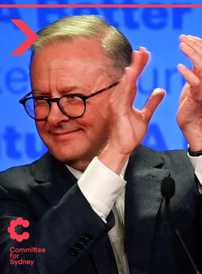 What does the change of government mean for Sydney?

Congratulations to Anthony Albanese: Australia’s new PM, a Sydneysider born and bred, heralding what we hope is a new era of constructive engagement with the big issues.

We work constructively with whoever is in government, and we share our ideas with anyone who can make change. The Committee is deeply committed to being non-partisan. But we are not blind; we noticed, like everyone else did, the way the previous government sent out a lot of messages conveying hostility to Australia’s capital cities and made a show of lagging on climate action.

We don’t see climate or caring about cities as the concerns of a so-called ‘inner city elite’ – if the last few years taught us anything, it’s that bushfires, extreme heatwaves, floods and many other impacts of climate change will affect people across Australia in profound, personal ways. By the same token, the economic opportunities in new industries that will power the renewable economy are spread across the entire country. There is no legitimate reason to make climate a culture war.

It’s time to get on with it.

Earlier this year, the Committee published a manifesto, Priorities for the next Australian Government, putting forward ideas in seven major categories:

Some of these ambitions, such as helping pay for fast rail between Sydney and Newcastle, will cost money that is not easily available. And Labor’s ‘small target’ election strategy has ruled out some of the most important reforms to tax settings and to housing affordability, at least for this term of government.

Nevertheless, there is plenty of opportunity to make progress on big issues.

We are encouraged by the openness toward business, reflecting the awareness we need Australian companies to be successful if we are going to provide shared prosperity for the population. This can open the door to productive compromises on issues like IR reform, as well as the country’s tax structure.

We are encouraged by the appointment of a former university Vice-Chancellor to head the civil service – we hope not just a sign this government values competence, but a way to open the door to policy settings that will allow higher education to thrive as a foundation of Australia’s future economy. This appointment has the potential to also send a message to the world that Australia cares about its global reputation, helping to repair damage that was done with international students and visitors to our country.

We accept Labor’s 2030 greenhouse gas emissions target of 43% by 2030. The real question is whether the policy actions are put in place to actually hit the target, and set up Australia for then going the rest of the way. There is enormous scope for progress. We hope to see Australia adopt vehicle regulations that look a lot more like the UK’s, while sorting out the market structure for energy. It is also the first time in years that NSW has a willing partner in Canberra on climate, presenting major opportunities to move a raft of policies forward, from electric vehicles, our transition from gas to electricity, and our move away from coal.

But, of course, it isn’t all about policy – tone is vitally important. It’s our great hope that the new federal government and parliament move our country forward to a much more respectful, inclusive and forward-leaning leadership style. The new parliament will be more representative than ever before, both when it comes to female representation and cultural diversity. Having our leaders look and sound more like us should lift the quality of our political discourse and help deliver better outcomes for all. As part of this, we look forward to seeing progress on the establishment of an Indigenous Voice to Parliament and policies to improve female workforce participation, starting with more meaningful action on childcare.

We look forward to working with the new Government of Australia to make real progress to move the country, including its capital cities, forward into the future.