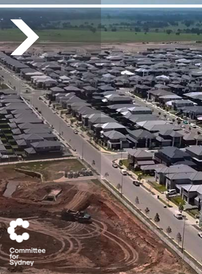 We can learn from Lismore now

As we prepare for the next rain bomb to hit Sydney this week, and communities across the city consider a possible third evacuation in just over a month, it’s timely the NSW Government has opened submissions for the 2022 NSW Flood Inquiry.

This six month inquiry will review the preparation, causes, response and recovery from the catastrophic 2022 east coast flood event. We applaud any effort to improve the preparedness of communities across the state to future disasters.

But there are lessons we can learn now that should influence how Lismore recovers, and shape how we make decisions about future growth and development in hazard-prone areas of Greater Sydney.

There is a clear need to increase the supply of housing in Sydney, that is undeniable. But the floods in Lismore (the first was two metres above the historical record) reinforce the need to put climate change front and centre when planning around current and future housing, and other urban development.

For decades, climate scientists have warned that the changing climate – Australia is already 1.4 degrees warmer than 1910 – would lead to more frequent and intense natural hazard events. (Further modelling by CSIRO and the Bureau of Meteorology found NSW is warming at 1.4 times the global average.)

This warning was reinforced by the latest IPCC report, which highlights that for many major cities tackling climate change, the challenge of cutting emissions and hitting net zero needs to be addressed in parallel with more short-term threats from increasing natural hazards.

Following the millennium drought, and heatwaves and bushfires of 2019/2020, Sydney has now experienced unprecedented rainfall, and record flooding in 2021 and 2022. While the 2017-2019 drought gave us new data about how long our drinking water supplies could last (four years), we also now have new data about flooding that puts into serious doubt our continued reliance on historical flood levels. The first Lismore flood on 28 February 2022, was 14.4 metres, more than two metres about the recorded historical maximum. The reticence of many to leave their homes and businesses was based on the belief that they had factored in the worst possible scenario.

In Sydney’s Hawkesbury-Nepean valley, the largest flood on record in 1867 peaked at 19.68 metres, approximately 12 metres higher than the deck of the present day Windsor Bridge – a bridge that we have seen under water several times in the past 12 months. And the data we have available only reflect records since European settlement. There have been 29 significant floods in Windsor since the Warragamba Dam was completed in 1960, including the second largest flood on record in 1961 (14.95 metres or 8 metres above Windsor Bridge).

The science is telling us these types of natural hazard events are going to be more frequent and more intense. The data and our experience over recent months and years is telling us how extreme these events might be in future. The coastal damage experienced across Sydney is another clear indicator. The past is no longer a predictor of the potential scale of future events.

Former NSW Planning Minister Rob Stokes put on hold future residential development in the Hawkesbury-Nepean Valley due to concerns about evacuation infrastructure. We know residents of the floodplain will not be able to evacuate in the event of a major flood. But what about a flood 2 metres higher than what has been planned for? We know now this scenario is not only possible, but grows more probable as we continue to heat our planet and increase the capacity of our atmosphere to hold moisture. The urgency to act on our changing climate is real.

Lismore provides the first test for new Planning Minister Anthony Roberts to create a precedent for how community, industry and multiple tiers of government can work together to create a safe and resilient community in the face of an uncertain climate future. This could be a future in which we refuse to put houses in the way of flood risk, and other natural hazards. A future that recognises that exposing property owners to rising insurance costs and repeated rebuild and clean-up costs is not the path to increasing housing supply.

The 2022 NSW Flood Inquiry is important. But actions on the ground will speak much louder than words. It is up to the new Minister to show how NSW is going to learn from Lismore, and the many other recent natural hazard events, to integrate climate risk into decisions about future development, to create a way out for vulnerable residents to move away from these risks, and to start reducing the density of development in the path of natural hazards.

We must plan for both challenges, but solving the former by building new homes in the path of future floods will only set us up for more heartache and devastation.