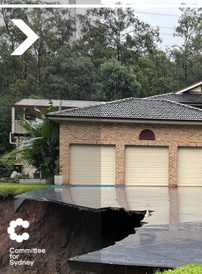 The time for delay and debate is over. A buyback program for the Hawkesbury-Nepean floodplain is needed now.

As each day passes after our most recent floods, we are hearing more accounts of the devastation faced by families across Sydney and our state’s north coast. ABC’s Four Corners this week had a confronting account of the situation on the ground.

Thousands of Sydneysiders are returning to their flood-affected homes, and wondering how they are going to rebuild one more time. Many haven’t finished fixing up their houses after the last flood. The physical scars are obvious. The mental scars less so.

A voluntary buyback program would provide a pathway out for some of the floodplain’s most vulnerable residents, those who can’t afford the rising insurance premiums, and those who don’t have the funds to restore their homes to make them safe and liveable again. These residents need a safety net. An acknowledgement that an earlier generation of policy makers got it wrong by approving houses in such risky locations.

Lismore residents are still waiting for decisions on the future of their town. The reality is many have already returned to their damaged homes as they have no alternative. Flood affected Sydneysiders are now in the same boat.

While the short-term reality is challenging, longer term it’s only going to get worse. Insurance premiums are rising with some residents of the floodplain facing annual premiums of up to $30,000, with premiums set to rise as the insurance industry reels from $4.3b in insurance claims this year alone. However, some parts of Sydney are no longer eligible for flood insurance, and Sydney is on track to have more than 90,000 ‘uninsurable’ addresses — the most of any Australian city — by 2100.

There are 6,000 properties below the flood planning level (also known as the 1-in-100 year or 1% Annual Exceedence Probability flood line). This is where we should focus the buyback program, opening it up to other areas that become uninsurable or impacted by flood events in the future.

Learning from past buybacks

As Christchurch rebuilt after the 2011 earthquakes, the city designated red zones for areas they determined should never be lived in again. Residential areas between the city and the coast were identified under a compulsory buyback scheme, ensuring 7,400 households were not out of pocket and the new information learned from the earthquake about the risk along the river in Christchurch was converted into new policy and practice.

In Sydney, a combined state and local government buyback program for 175 flood-affected properties in Liverpool has been in place since 1984. More than 50 houses still haven’t taken up the offer 38 years later. To make it clear, a voluntary program means residents retain the power to choose what to do with their own homes.

A buyback scheme is the first and most important step towards reducing the number of residents directly exposed to flood risk. Flooding in these parts of Sydney is not going away, and climate change projections indicate rainfall events like those of 2021 and 2022 will become more frequent and more intense into the future.

Why should we buy them out?

Isn’t it fair to say ‘buyer beware’ and leave them to their fate? In 2020, a survey by ResilienceNSW revealed 80% of residents of the Hawkesbury-Nepean floodplain did not know they were living with flood risk. This means very few, if any, property transactions disclosed the risk new residents were taking on. This approach may be within the letter of the law, but that only means the regulations about how risk information is shared with prospective home owners (and renters) need to change. In whose interest is it to keep this information hidden?

Perhaps we should introduce an annual notification to all property owners and renters in the floodplain, advising them of flood risk, evacuation routes (and capacity challenges), and what to do to prepare for the next flood. Again, who is afraid of this kind of transparency?

What about Warragamba Dam?

Buying back these properties removes the risk to those thousands of residents forever. It would take the pressure off the SES to notify and prepare to evacuate these residents every time dark clouds gather, and it would remove the need for financial support from state and federal government to help these residents back to their feet.

It’s time to change the risk equation for residents of flood-exposed Sydney – we believe government should do three things:

This would be a considered, rational and compassionate response to four flood events in 16 months. It would be a demonstration of leadership for some of the most vulnerable people in Sydney.