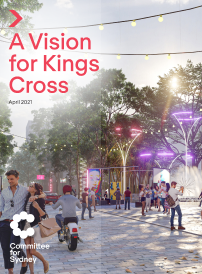 A vision for Kings Cross

Alongside images of the Opera House and Bondi Beach, Kings Cross is one of the most internationally recognised places in Australia. Its eclectic history as a bohemian area, a red-light district, home to gangsters and cut throats, movie stars and artists, live music and theatres, dive bars and discos, has made it an intriguing place to live or to visit. It was a place for new migrants to find a home and for the rich to play. For the past century it has built a reputation for being vibrant though also naughty, edgy, and gritty — delighting, and sometimes shocking, an often-conservative Sydney.

But for all its colourful history and naughty reputation, Kings Cross has been knocked off kilter. In 2014, a spate of alcohol fuelled violence and some tragic deaths sparked outrage from across the community. In response the NSW Government imposed a series of reforms and restrictions which collectively become known as the ‘lock-out’ laws. The result was a significant decline in night-time activity which saw most of its bars and night clubs closed2 . With much of its local economy based on alcohol sales the precinct experienced a dramatic economic decline. Five years later and many venues are boarded up and most of its bars and clubs closed. With much of its economic vibrancy gone and fewer visitors, the edgy parts now just look threatening to some, and the gritty parts look messy and unkempt. Most of its night-time economy has moved elsewhere, many tourist hotels have been converted to apartments, and the precinct has lost lots of jobs in hospitality (-12% since 2014), retail (-10%) and, of course, in pubs and bars (-33%).

Investment in new restaurants, shops and bars has been limited as the regulatory environment is uncertain and the future economic direction of the precinct is unclear. Many of the shopfronts are on short term leases as landowners wait to see what the future holds. Some are considering redeveloping their land to more residential use. Perhaps worst of all, its vibrant reputation is in tatters and it is regularly described as being dull. The Covid-19 pandemic has only accelerated the precinct’s malaise, with tourists gone and venues shut.

The Cross is undergoing a metamorphosis – and yet to land in a place that rests easy with its history and provides a pathway forward for its future. It is a precinct that, right now, doesn’t seem to know what it wants to be, what its purpose is, or what its future should look like. It seems to be waiting for something to happen or something to change.

But it need not be like this. The Cross still has all the ingredients for making a great and vibrant place. It has a wonderful street network, intersected with interesting lanes and parks. It has great transport access with connections to the City Rail network, and easy access to the CBD. It has a rich and beautiful architecture, housing the highest population density in the nation. And it has a great and colourful history. In short, it has great bones on which we can build a great place and a great future that improves liveability and ambience for local residents, and that visitors also find appealing.

This report seeks to set out a new vision for the Cross, one which builds on its rich history but also seeks to avoid some of the mistakes of the past. It outlines some key moves which the local community and businesses suggested should be considered to rebuild the area’s vibrancy and liveability. It focuses on rebuilding the precinct through a new economic strategy, along with good ‘place-making’. It looks at activating the street by promoting restaurants, bars and cafes with alfresco dining and kerb side seating. It looks at how a new night-time economy can be supported — one not based solely on alcohol— but on live performance, theatre, restaurants, small bars and tourism. It looks at how the local economy can diversify to become a place of work, as well as rest and play, because a good night-time economy doesn’t mean it should not also have a healthy daytime economy. It looks at resetting the Cross as an integral part of Sydney’s visitor economy, offering a fun and safe time, day or night – and for that offering to be available for locals and visitors of all ages and interests.