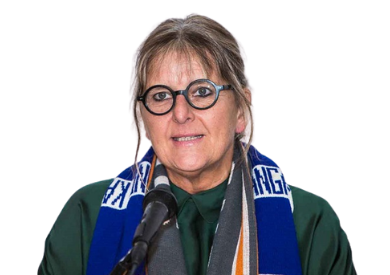 Gabrielle Trainor is a non-executive director and advisor whose experience covers over 25 years on boards in the public and private sectors ranging from infrastructure, financial services, transport and urban development, to sports, arts and culture, and the empowerment of Aboriginal and Torres Strait Islander people.

She is a member of the boards of the Victorian Government’s Major Transport Infrastructure Authority, Zurich Australia Limited and listed investment company WAM Global. She is a director of the ACT City Renewal Authority, the Western Parkland City Authority and Built Pty Ltd.

Gabrielle is a member of the Western Sydney University Foundation and a trustee of the Charlie Perkins Education Trust. She chairs the Construction Industry Culture Taskforce, a joint project of industry, academe and the NSW and Victorian governments. She is a member of the Gadens Advisory Board and a Commissioner of the Australian Football League (AFL).

She has had a long association with the Australian Institute of Company Directors as a member of various committees, as a presenter and a Fellow.

Her time on several boards in urban renewal, transport and infrastructure has been characterised by her interest in creating quality of life – through arts and culture, the public realm, sustainability and community engagement in the social fabric. She has a Masters’ degree in Creative and Cultural Practice. She chaired the arts and culture panels of the Docklands Authority and the Barangaroo Delivery Authorities and chaired the reference group for Infrastructure Australia’s 2019 paper on Future Cities.

Her previous experience is as a lawyer, journalist, public sector executive and a consultant for 30 years in issues management, stakeholder engagement and public policy. She co-chaired a Federal Government review of the Australia Council for the Arts and represented Australia at an international cultural forum hosted by the Korean Government in 2012. She was a founding director of the GWS Giants whose AFLW team’s annual best and fairest medal is named in her honour.

Gabrielle is a Churchill Fellow and a member of Chief Executive Women. In 2017, Gabrielle was named an Officer in the Order of Australia.